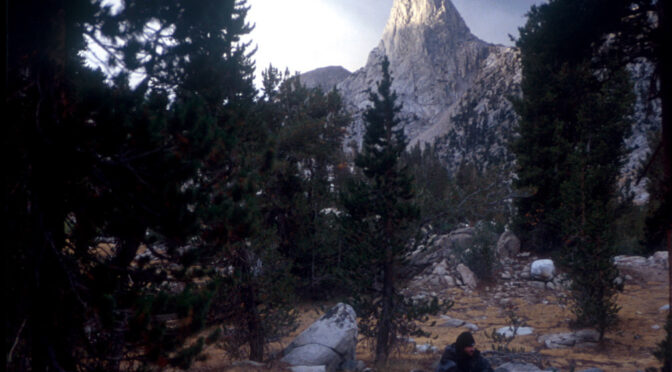 Awoke early to get down to the trail junction early, where the escort was to begin. We saw smoke when we got up, and we passed a campsite of NPS fire workers on the way. They told us they’d meet us at the junction. Took us about a half hour, and they followed close behind and said we’d leave around 8:00. At the junction, as we waited, I chatted with the two NPS employees and with two ultralighters (a father and son team) who had spent the night at the junction. One worker, Ken, was on the radio with someone else saying we needed to wait for one more. It turned out to be Tim and Cheryl. I chatted with Ken for a while, he is a “controlled burn specialist.” He said the fire was a natural one, one which they’d thought needed to burn as there was a lot of blowdown there, and their main responsibility was to closely monitor and measure it. They were trying to keep the trail open. The fire had a tendency to flare up with the afternoon winds, so we only had a window of opportunity in the morning *if* we hurried.

Well, hurry we did. The first mile, all uphill, was at a pace just beyond my capacity. I was totally beat. After a break, we did another hour, and finally finished. But Ken had had to ask me to stay close to him (because I was the slowest of the group.) Yow! Fast group. Anyway, the burn zone was pretty neat. Sometimes entire trees on fire, or the whole ground area, sometimes big, thick clouds of smoke. We finally got through, and there was a woman waiting for an escort going the other way. Our total was 1:45 hours at what I thought a blistering pace.

After Palisade Creek and the fire zone, and after Deer Meadow, one passes along what is called the “Golden Staricase.” The last section of the JMT to be completed. Blasted out of the rock with dynamite. Well, this “Golden Staircase” was a huge pain; a difficult trail to negotiate. Huge steps, loose rocks, everything which makes a trail difficult. To me, this section will forever be known as the “Golden Staircase my ass” section. To make matters worse, I ran out of water. To make matters even worse, Todd ran out of water soon thereafter. The map showed no water sources nearby until the top. We had not filled up that morning, and with the rush through the fire zone had not yet replenished. It was just beginning to become an agonzing hike when I noticed a rushing mountain stream well below a switchback. It was a bit difficult to get to, but well worth it for the water.

Finally, we ascended out of the “Golden Staircase my ass” and we halted at Upper Palisade Lake at about 2:00. It was a very pleasant relaxing camp site, and I even swam in water that must have been no warmer than 60 degrees.

While relaxing on this quarter-day break, I looked around at the scenery—a gorgeous cobalt-blue alpine lake, surrounded by 12 to 13 thousand foot peaks, with an outlet to the west through which one could see the Palisade Valley below, with clouds of smoke periodically rising depending on the intensity of the fires miles below. Disapointment Peak (13,917′) reached up behind me. Looking around, I realized a couple of things. One, that it was incredibly easy to get lost in the beauty of the surroundings. I almost never did any reading, even of the guidebook, until I was in my bag ready to go to sleep. Hanging out and gazing at the mountains somehow never left enough time to do anything constructive. And two, how ill-founded my pre-trip concerns about “finding campsites” had been. The Sierra Nevada in these parts were remarkably well fitted to camping. Now, if you absolutely had to have trees, or water close at hand, or dirt to drive in tent stakes you might be stuck looking for a while, but if you do as I did and didn’t use a tent, and frequently packed enough water to “dry camp” you could find a nice level campsite almost anywhere. In fact, one of the requirements Todd and I had in finding a good site was the availability of furniture; i.e., granite boulders of the proper size and attitude to allow one to sit on, cook on, or even sleep on. We were rarely disappointed.

After a hard but not too long day, I slept well.

There was a herd of bison walking right toward me at @YellowstoneNPS today!

Navajo Nation closes its parks, recreation due to coronavirus concerns https://www.daily-times.com/story/news/local/navajo-nation/2020/03/14/coronavirus-new-mexico-navajo-nation-closes-parks-recreation-areas/5046749002/ via @TheDailyTimes