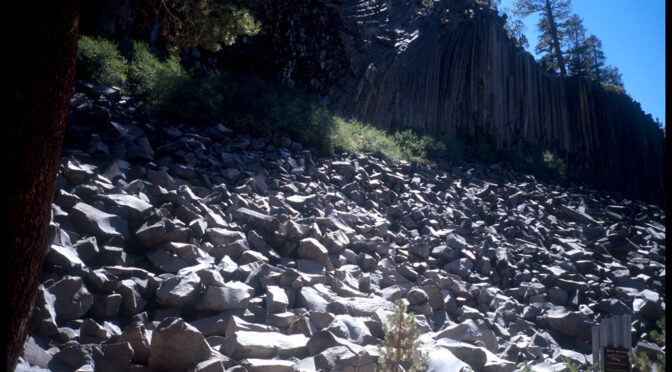 Left Rosalie Lake around 8:00 a.m. After a slight ascent, the trail was all downhill to Red’s Meadow. Very dusty. In fact, dusty in a choking, sticky messy way. But anyway, I reached Devil’s Postpile National Monument at around 11:15 a.m. A ranger was giving a talk on the trail right at the postpile as I walked up. I felt a little conspicuous, as the crowd was obviously mostly folks who had driven in. (I later found out that very day was “National Park Day.”) I tried to snap a picture of the marten the ranger was pointing at as I arrived.

I self-conciously felt the crowd regarding me as the old stinky, dirty, mountain man type as I walked by the families with kids spilling ice cream over their t-shirts. I left the ranger talk behind, walked around the postpile for a while (an interesting site), then found the way to Red’s Meadow, the main campground there. There are few instructions on how to get to the campground if you approach from the backcountry side as I did, but I finally found the campground and the backpacker’s campground within it. The backpackers’ site was empty, so I staked out a place, reserved it, and found my way to the natural hot spring showers, about a hundred yards up the road. Now,those who are used to city-fied showers and such may turn their noses up, but these half-dozen closets, each with a simple tap and overhead outlet, are each sublime to those of us who come out of the backcountry. The water is not only hot, but almost too hot. It was excellent. I came out of the shower and went back to my campsite practically oblivious to anything for an hour or so.

After a rest, I set up my primitive campsite (sleeping bag and bivy sack) and began working my way over to the store and cafe. As I walked down the paved road from the campground, I saw a man hiking up the road; obviously a backpacker. He stopped to look at the campground map, and I pointed the backpacker’s campsite and hot spring showers out to him. I finally found my way to the store, and bought the usual chocolate milk and potato chips. Next, I went to the cafe next door and had an excellent cheeseburger. I called my folks and left them a message indicating my survival up to this point, and I also did some laundry in a washing machine there. Before heading back to the campsite I “reserved” a steak for the evening meal.

Back at the campsite I met Todd (the guy walking in when I was leaving) and a couple, Tim and Cheryl who had already set up their campsite. We talked a while, swapped stories and shared advice. Tim came back from the store with a full can of Coleman fuel he couldn’t use, so we split that among ourselves. A bit later, we ate supper back at the cafe. The steak was very bad. Most disappointing. Afterwards, as we were sitting on stumps between the cafe and the store, a horse pack train passed us coming in from the backcountry. Tim mentioned quite loudly and humorously that perhaps the wrangler ought to count his horses in light of the toughness of the “steak” we had just consumed.

Back at camp, another pair had set up. Actually, as there were only three sites available we had to share, but it was no big deal. Dan and Dale were doing the Sierra High Route, a route roughly parallel to the JMT but off-trail and even higher in the mountains.

We all had a few beers as it got dark, and shared stories and complaints. Although I was feeling pretty strong generally, my feet had been fairly well chewed up, and the half day off would do them a world of good. I fell asleep trying to ignore the cacophony of car campers with families that I had thankfully not been around for a week. 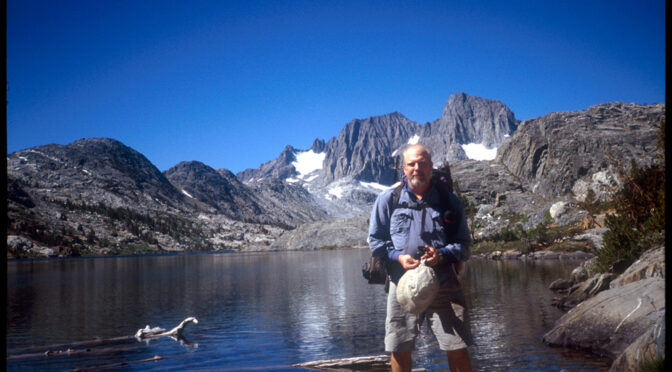 I had figured it would be 14.9 miles if I wanted to make Red’s Meadow today, and I really knew I wouldn’t make it. So I had spent a good deal of time with the guide book and map figuring out potential campsites without significant bear problems. The series of high alpine lakes I was about to travel through had a reputation of being popular with both humans and bears. I was still somewhat naive regarding the Sierra Nevada, but soon learned that the proximity to campgrounds and trail heads around Mammoth led to huge numbers of people, and the other megafauna associated with people—horses, bears, etc..

Anyway, I didn’t see anybody on the trail for the first few hours, but when I began to approach Thousand Island Lake, I began to run into people. But to be perfectly honest with you, I’m not sure I recall correctly the stretch of the trail around Thousand Island Lake. I don’t recollect properly (even with photographic assistance) details of that stretch of the trail. I do recall a couple camping near there, illegally close to the trail, with a dog, a barking dog. He lunges, but I survive.

Next, I’m winding my way down toward Garnet Lake. I wend around the north side, then get to the bridge. I stop there to refill my water, amongst the deadwood, and as I’m doing so some chattering hikers (looked like an extended family) come up and insist on my taking a picture of them, so I insist on them taking a picture of me.

Ascending from Garnet Lake, I felt a bit of stomach distress; I worried it might be the start of something more sinister, but it would never bother me again on the trip.

The trail ascends to an unnamed pass, then descends fairly steeply into the Shadow Creek drainage. It seems pretty steep to me, and especially full of loose and unstable rock. It seems as though this descent goes on and on forever, passing through timberline, then into a dry and dusty trail in the woods. It also seems to get pretty warm, and I’m working up a sweat. The lower I go, the dustier the trail gets, and I began to run into more and more people, including a pack train or two. I realize I’m getting close to Agnew Meadows, a popular summertime camping area complete with horse corrals, and it is in fact a weekend, so the crowds should not be unexpected. Still, I get a bit concerned over the number of folks on the trail (for no good reason, as it turns out).

END_OF_DOCUMENT_TOKEN_TO_BE_REPLACED 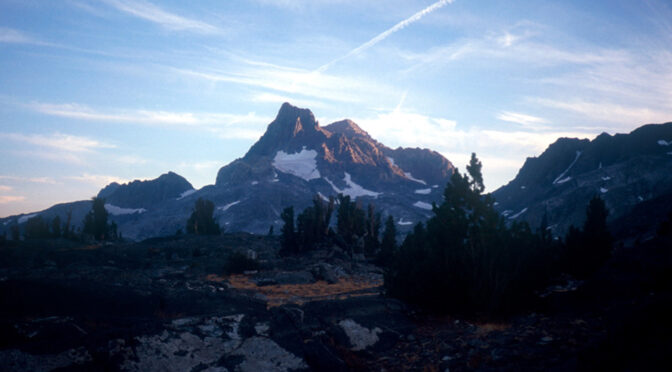 Well, I awoke having not been eaten by a bear, or a marmot. After breakfast I had a bit of a time finding the trail again; had to bushwhack a bit and find a good fallen tree on which to cross the stream. It was about 8:00 before I finally reached the trail proper. Today would be my first substantial climb since day one, as I would be achieving Donahue Pass (11,056′). Since I had camped at the very end of the meadow, the trail immediately began to climb. I noticed along the way a few good campsites, and half-wished I had gone further the previous day. At one spot there was a very nice area by a stream crossing, and I filtered water and took a break. I was passed by a few people along the trail, including the young man I had seen camping near me. We chatted a bit; he said he was only up for the weekend and was hiking through to Red’s Meadow. We both chuckled at the scarcity of the famous Lyell Canyon marauding bears.

END_OF_DOCUMENT_TOKEN_TO_BE_REPLACED 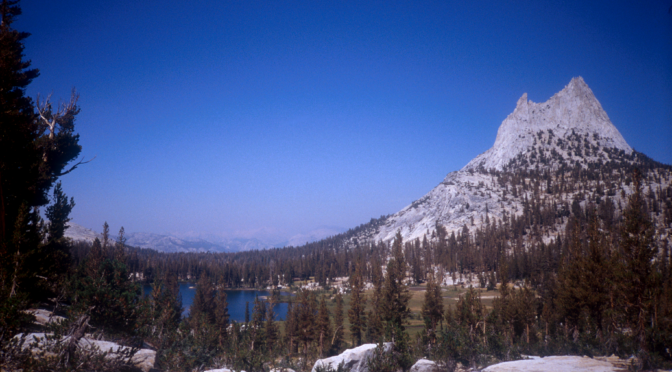 I departed Austin around noon on a Friday in August. I had with me my gear, a reservation for both a motel in Bishop, California and a campground in Yosemite National Park, and a wilderness permit secured several months before which was supposed to enable me to stroll from the Happy Isles trail head in Yosemite, through wilderness areas in national forests and two other national parks, and arrive at the summit of Mt. Whitney, 211 miles to the south. In addition, I had secured a promise from my brother to meet me at the Bishop motel, follow me to Whitney Portal to drop my truck off, then ferry me to Yosemite.

I had been planning the trip for a couple of years, and had spent the previous year acquiring gear, maps and knowledge that afforded me the least likelihood of a premature exit from the trail. During the drive out west, I kept going over trip and equipment details and fighting off the nagging feeling I had forgotten something. (Something I’m sure every backpacker deals with.)

This was probably the first time I’d driven to El Paso since they’d increased the speed limits; I was surprised to find even though I had left late (around noon) I still got plenty of miles in that day. I spent the night in Las Cruces, New Mexico. The next day I made a logistical mistake; owing to my dislike of Interstate driving (with a capital “I”) I tried a shortcut from southwestern New Mexico to eastern Arizona. It *looked* like a shortcut on the map, but ended up going pretty slowly, so I probably lost some time there. I made it to Boulder Dam by sunset, after a brief security check to make sure I wasn’t going to blow it up. It was the first time I’d been there since I was a kid in the 1960’s, and it actually looks pretty cool—a monument to 1930’s WPA engineering and retro design.

Anyway, I spent that night in a motel in Vegas-didn’t feel like gambling, so I was pretty out of place there. Left early the next morning, past Nellis AFB and bombing range, and then across Death Valley. I had last visited there in 1986 when it was a mere “National Monument”. I had enjoyed that time there, but that had been in October, with highs in the 90s. Average Death Valley high temperatures are around 115 degree in August, and when I passed through they had been experiencing unusually hot days, even for them, with highs over 120 degrees. Driving through at 9:00 a.m. I didn’t need a thermometer to tell me the temperature was already well over 100 degrees. After a few hours, I was on 395 heading up the east side of the Sierra Nevada. I took a quick detour at Lone Pine to the Whitney Portal trail head and parking area, so I’d know what to expect and not have any unexpected surprises. It was actually pretty well packed, and I made a note of where the “overflow” parking was.

I continued on up the highway to Bishop, found my hotel, and my brother showed up a few hours later. I treated him to a nice steak dinner at a local restaurant, figuring I might not have another good meal for quite some time.

We got up the next morning and drove to Yosemite, stopping at a gas station/grill at the turnoff near Mono Lake for a pretty good cheeseburger.Got to the Crane Flat campground, where I’d already reserved a camping spot, later that afternoon. I spent the evening sorting out my gear and food, and we ran down to some bear boxes at Tuolumne Meadows to stash some stuff I wouldn’t need for the first two days of the trip.

END_OF_DOCUMENT_TOKEN_TO_BE_REPLACED

Seeing all the news about the flooding in Death Valley reminds me of my camping trip there in 1986.

Leave the DRONE at HOME. Birds and bugs should be the only things flying through Capitol Reef’s skies. It is illegal to fly your drone in most national parks because they can disturb wildlife and visitors, and can get stuck in places where they may be impossible to retrieve.