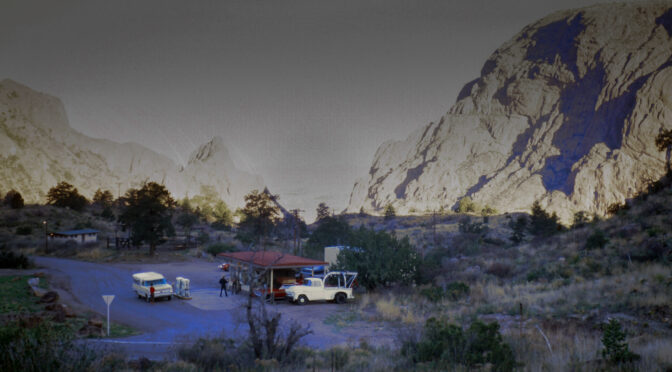 I don’t have any notes saved from this trip. I was only nine years old. I really fell in love with Big Bend during that trip; actually, with the whole idea of deserts and mountains. I’d been to Colorado on a family trip a few years earlier and recall being amazed at the mountains and the abandoned mines we saw high up on the slopes; and the scary drives over the unpaved roads along the mountainsides. But for some reason, on our trip to Big Bend something clicked.

I know this trip was around Easter Sunday, in 1968. Looking at a calendar I see that fell on April 14 that year; I’m guessing we were there for the week prior. I don’t think we got spring break in those days, either at my elementary school or for Dad’s job at UT.

I don’t remember the long drive out there on highway 290, although I can assume I was probably getting bored. But to this day I have a vivid recollection of the drive approaching the Chisos, as we began to ascend up The Basin road, past some drums full of water for overheated radiators. I kept staring at the rugged cliffs and thinking “Wow, I wonder what it’s like up there! Wandering around up there would be the greatest thing ever!”

Turns out I was right!

The Lodge in the Basin was there even back then, but much different than today. The main building with the restaurant was there, but only limited lodging. And a small gas station. We stayed in a cabin; I think it was one of the old CCC cabins but I’m not sure. It was cozy for a young family of four, but I don’t recall spending that much time in it.

Aside from the permanently stamped wanderlust the trip had on my young, impressionable mind, I only recall bits and pieces of the trip. I recently came across Dad’s slides, and have scanned most of them, but they don’t trigger many new memories.

One thing about the photos: Dad was a good photographer and very experienced at shooting outdoor exposures, yet all these have a definite overexposed cast to them. So much I had to severely correct them in Lightroom. I wonder if maybe the film was damaged by the heat? Who knows…

I only vaguely recall the hike up Lost Mine Peak trail; being close to Easter I was sure I would be the one to discover the lost mine. I definitely remember hiking the South Rim; we got a very early (dawn) start. On the way down, my big brother and I left our parents behind and finished before they did. I remember trying to climb that pile of rocks in the middle of the Basin (of course I couldn’t do it).

Our slides show that we also hit Santa Elena canyon, which I don’t remember.

Nine years later as a young adult I would make my first “non-family” trip to Big Bend NP; then in the 80s would start regularly visiting the park for camping, hiking, backpacking and exploring.