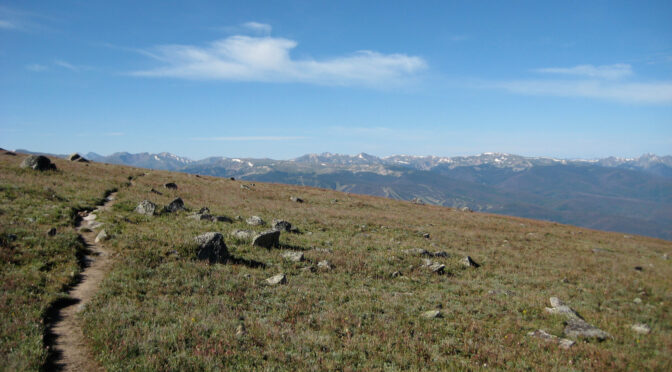 I’ve hiked many times in the Indian Peaks Wilderness, just south of Rocky Mountains National Park. This time was a multi-day backpacking trip. Because of the nature of the trail system and the need for permits in advance, I planned a route with a sort of curly-cue path.

I would start at Hessie trailhead, go up to King Lake at the Continental Divide for the first night’s camp. Then along the Divide and the “High Lonesome” trail until Devil’s Thumb, where I’d cross the Divide back to the East side, down past Jasper Lake, down to the trail junction then back up to timberline via the Woodland Lake trail. I had a permit for night two in the Woodland Lake backcountry zone, meaning most likely camping at Woodland Lake or the even higher Skyscraper Reservoir. Then, I would return down to the trail junction once again, thence back up the trail toward Jasper Lake except this time taking the cut-off to Diamond Lake and Fourth of July, then ascending all the way to the Divide again, this time at Arapaho Pass, with a camp at Lake Dorothy (12,061’).

This was the plan. In reality, it worked fairly well. Day 1 went as planned; a friend from Boulder wanted to do some day hiking in IP, so he went along for the hike to King Lake and the Divide. Day 2 was long. It started off quite well, I felt great, a bit cold, as the High Lonesome was exposed and very windy. Also it turned out the weather had changed a bit; still clear, but cooler. After re-crossing the Divide near Devil’s Thumb, the descent down to Jasper Lake was fairly steep and arduous. I was beat by the time I lunched at Jasper; then further down to the trail junction to then begin the climb up Woodland Lake. I may have underestimated the climb up this trail. It was extremely difficult. A steep elevation gain, coupled with a very uncomfortable trail–like climbing in a creek bed the entire way. I was seriously concerned about not making at least Woodland Lake by nightfall (Woodland Lake is near, but not quite the terminus of, the trail, that being Skyscraper Reservoir a few hundred feet beyond).

Finally, I reached Woodland Lake, which is a beautiful wooded lake, with a few nice campsites. I was so tired by this time I was ready to pick the first one. But I didn’t. The first one was, well, it was close to the trail and had no view of anything, even the lake. So I went a bit further. The next site was spectacular; right on the lake, with abundant flat spots for camping and cooking and sitting. But, there had been significant trees blown down recently, and several more ready to fall (the Forest Service had closed several sites at Jasper Lake due to dangerous trees). Near the site I was looking at were a couple of fallen trees, but suspended by yet a third, healthy tree. I didn’t like the looks of that. The NPS had a term for that: widowmaker. So, reluctantly, I decided to head yet farther along, up to Skyscraper, which was above timberline, and widowmakers. The final ascent up there was still steep, and painful to my weary joints and dogs. To be continued…

Seeing all the news about the flooding in Death Valley reminds me of my camping trip there in 1986.

Leave the DRONE at HOME. Birds and bugs should be the only things flying through Capitol Reef’s skies. It is illegal to fly your drone in most national parks because they can disturb wildlife and visitors, and can get stuck in places where they may be impossible to retrieve.