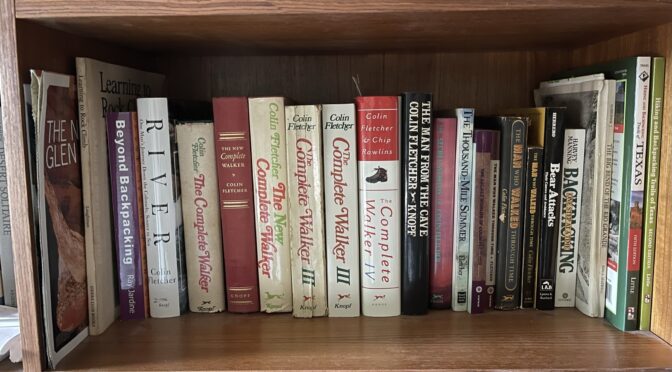 I was trying to explain to someone why I had so many copies of Colin Fletcher’s Complete Walker series. It started in 1984 while I was working offshore. One of my trainees, an experienced backpacker whom I had been grilling for information on the hows and wheres of backpacking, noticed my subscription book club had the new, third edition of The Complete Walker available and suggested I order it. So I did.

I’d traveled a lot with my family when younger, including several trips through the American West, and a half year living in Norway. But since graduating High School in 1976 I’d only been on one trip, a car camping trip to Big Bend with a buddy, an experience I’d really enjoyed. Now, with no school in my way, and with frequent extended time off (oilfield work was weeks on, a week or more off) I yearned to start camping, hiking, and maybe try this “backpacking” thing.

Honestly, I don’t remember which came first; the topo maps, the mail order gear/clothing catalogs, and still more maps. My mother gave me some of their old brochures and USFS maps and more camping information for New Mexico and other points West. Back then (and still today, to an extent) I had a propensity toward paralysis by analysis; I would hesitate to do something unless I had absolute confidence I knew exactly what to expect.

I subscribed to REI, Campmor, and Patagonia catalogs. I bought topo maps from the USGS and began to frequent the only “backpacking” type store in Austin, Whole Earth Provisions. I acquired trail guidebooks to trails in areas I intended on visiting. But mainly I devoured The Complete Walker III. He (Fletcher) assured me that the desire of mine to get to the outdoors, and into the wild areas was perfectly normal and explained why. His philosophy wended its way through the book which was ostensibly a “How To” guide to backpacking and left me feeling convinced but not proselytized to. His explanation of technique as well as the gear utilized on everything from pleasant weather day hikes to multi-week treks in the mountains was insanely detailed yet eminently readable. His common sense approach to the subjects covered–not a “backpack” but a “house on your back,” not a cookset but the “kitchen” showed his desire to make backpacking less of an esoteric undertaking and instead merely a different, better way of doing things. Why drive when you can walk outdoors? Why sleep in a room when you can sleep in the wilderness?

Working offshore in those days left one fairly isolated from the rest of the world. Sometimes a daily newspaper (often a day or two late), AM radio, (but usually no TV) meant I had a lot of time to “study up” on what trips I wanted to take. My first trip, my first solo trip with the sole purpose of hiking and camping, was a loop starting in Big Bend National Park, then to Guadalupe Mountains National Park to climb Guadalupe Peak, and a return home via Carlsbad Caverns National Park.

I began accumulating gear, much of it straight from Fletcher’s suggestions in TCW III. I should point out that I was making pretty decent money for a young man and price wasn’t really an object for me in the acquisition of camping gear. I’d see something mentioned in the book, look through my catalogs, find it and order it. (Pre-internet days: Ordering mail order meant literally filling out an order form that came with the catalog and returning it with check or credit card # on it. You could usually order by phone but we had no phones out there.)

By the time I got to my first backpacking trip in 1985, I was looking like Colin Fletcher, Jr., decked out in my Patagonia pile jacket, New Balance light hikers, Gregory Cassin backpack, Sierra Designs Clip Flashlight 2 tent, MSR stove, and so on.

Fletcher was a bit skeptical of the new “Ultralight” trend in backpacking gear; therefore so was I. But he accepted it, and was intrigued by the many improvements made possible with modern technology, especially with respect to lightweight durability. By today’s standards his gear (and mine) was laughably heavy. I would suffer under some of the weight issues, learning the hard way the penalties of pounds and extra ounces and start a lifetime of self-paring.

But back to why I have so many copies on my bookshelf.

The first one I added was a replacement for my original CW III; the pages were literally coming out from years of handling. I picked up a copy at Half-Price Books. Next, The Complete Walker IV came out in 2002. I eagerly awaited its release; but it disappointed me. It was written with a co-author, and I didn’t find the same pleasure in reading it as a narrative. In fact, I couldn’t, and don’t recall if I’ve ever “finished” it. (Fletcher had a serious auto accident the year before it was released.)

There is even an “Easter egg” of sorts; the dust jackets of the hard cover editions (and the cover of the paperback) have a detailed photograph of all the gear he took with him backpacking.

Anyway, I picked up a New Complete Walker at Half Price Books, but it didn’t have the dust cover. But then, years later, I found one with the cover, so obviously I had to get that. The original The Complete Walker proved more difficult to find, but a few years ago I finally came across one at Half Price Books. I was going to buy it regardless, but there is something about that particular copy of the book that is very personal. When I opened it up, on the inside cover was a sticker “From the Library of …” and the name was a friend and colleague of mine from work, who had passed away suddenly and unexpectedly while hiking in the Pacific Northwest on vacation. This one will always be special to me.